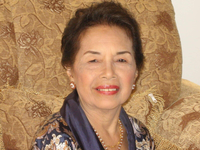 Corazon Perez Almero Mendoza, age 88, passed away just after this holiday season on January 2, 2020. She was born January 27, 1931 in Batangas, Philippines to Maria and Julian Almero. In the spring of 1956 she eloped with her husband, Loreto Mendoza, with whom she ‘fell in love at first sight’. They were blessed with nine children who were all born and raised in Balayan, Batangas, Philippines. Corazon retired in 1991 at the age of 60 from her occupation as a Home Economics Specialist at the Philippine Department of Agriculture. Her work provided the education of domestic skills to those residing in poverty and rural areas to maximize the use of local resources, including cooking, sewing basic clothing, farming, budgeting and sanitation to improve quality of life. Shortly after her retirement, she left the Philippines for New York to live with her working daughters and raise their children. The rest of her life was spent living in Bayside, Queens, where she established home-based businesses including sewing , catering, caretaking, and took up various odd jobs all while lovingly looking after her grandchildren, her husband and creating a home. Over the years Corazon never spent any money on herself, but saved and sent whatever she earned back to the Philippines to support the rest of the Mendozas, funding the schooling of her grandchildren and building a new ancestral home for her family in Balayan. Though the family was split between the U.S. and the Philippines, Corazon was the bridge that connected them. As the ‘heart’ of the Mendozas, Corazon dedicated her entire life to her family. Her sacrifices are the pillars that will forever uphold her legacy. She is survived by her husband, one sister, eight children, 22 grandchildren, 8 great grandchildren and the love of all that had the pleasure of meeting her in this lifetime.