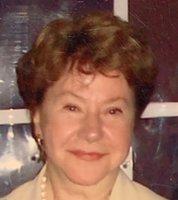 Alma DeMenna (nee Brogan), a longtime New Hyde Park resident, passed away of natural causes June 1 at Good Samaritan Hospital Medical Center in West Islip, NY. She was 95 years old. Alma was a vibrant woman of many talents, with a great sense of humor and quick wit. Alma was a graduate of Flushing High School in January 1943. After graduation from Plaza Business School, she worked at the accounting department for the Boy Scouts of America. Later, she worked for the National Broadcasting Company at 30 Rockefeller Plaza. After a series of promotions, she became the Executive Secretary to the VP in Charge of Engineering. During her tenure there, she married her husband, Leonard in 1948. She worked at NBC until 1950. Alma returned to work in 1965 for the Herricks School District as the secretary to the Superintendent of Buildings and Grounds. She retired in 1993. Alma was an accomplished artist and had been a member of the Art League of Nassau County. Volunteering as a docent at Old Westbury Gardens in her later years was a source of joy. Playing the piano brought comfort in her life, as well as spending time with her adored children and granddaughters. She was an active member of the Notre Dame Parish in New Hyde Park since 1954. Alma cherished her many friendships. She was preceded in death by her husband of 56 years, Leonard; Sisters Francis and Mary; Brothers Paul and Richard and daughter Janet. Alma is survived by her loving children Richard (Gloria) of Thomasville, GA; James (Arie) of West Hollywood, CA; and Nancy Arciere (David) of New Hyde Park. Granddaughters Stephanie Ruppert (Christopher) and Ellen Arciere both of New Hyde Park. Cousins Joan Cautela (Thomas) of Levittown and Thomas Brogan (Joan) of Mount Sinai. Special nephews Robert DeMenna (Cheryl) of Mableton, GA; Edward Miller of Beacon, NY and special niece Lois Grebler (Martin) of Glen Allen, VA. Extended family and friends.