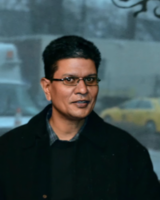 Ronald P Dukhia, commonly known to the world as "Heads," was born December 7th, 1968, in Rosehall Village, Guyana, to Gally Dukhia and the late Christopher Dukhia. His journey came to an end on July 21st, 2021, when he went home to be with the Lord. Ronald attended Farley Primary school in Rosehall and later attended JC Chandisingh High School in Georgetown. After finishing high school, Ronald spent a lot of his time with his loving Aunt Ritta. Ronald attended Guyana Technical Institute, where he achieved accreditation for brake & suspension repairs, engine repairs, and earned an associate's degree in Mechanical Engineering. After graduating, Ronald migrated to New York to further his studies. After moving to New York, Ronald was soon employed at the New York Palace Hotel in Valet Services. Ronald loved people, and most of all, he loved and trusted his many friends. He had a kind and generous heart and was always giving to those in need. Ronald only saw the good in people and always looked at the world as a great place to be. Equally, his love for family was the same as his passion for God. He started to serve the Lord at a very early age. He grew up helping at St' Francis Xavier Roman Catholic Church as an altar boy along with his brother, Anil. Ronald learned how to drive at a very young age in Guyana. His love and appreciation for the inner mechanics and workings of a car led to his studies in Mechanical Engineering. Ronald's character traits and treasures that made him so remarkable were his faithfulness and pure-hearted love for his family. Even from a young age, Ronald enjoyed spending much time with his aunts, uncles, and MANY cousins. Ronald left behind a lifelong legacy and, most importantly, his mother, Gally; his sisters Marcie, Kim, and Nellie, his brother Danny-boy; his brother-in-law's Ravi and Clarence, his nephew Christopher, along with his loving cousins, aunts, uncles, extended family, and friends. Ronald, the pages of your book will never be closed, just as your Dad's and your little brother's pages never will. You will remain in our hearts forever, Till we meet again, Ronald.